Congratulations to Jaikiah Honner, 6J, who had an excellent day at Regionals, finishing 1st in the 200m and 2nd in the 100m.

Last Thursday the Regionals were cancelled due to the weather and the events were moved to Monday of this week. On Monday I had a thirty minute warm-up when I arrived for my 100m race.  I came second in my heat and second overall in the final, with a time of 13.35 and I received a medal.

I had a quick muscle roll before my 200m sprint event. I came in first in my heat and first overall in the final, with a time of 26.93. I beat my personal best time by just over a second and was awarded a First medal for that. We calculated that I was running at about 26km/h.

I returned to school proud of how I went and and to share my success with the teachers. I am now going to State final today at Lakeside Stadium at Albert Park. I hope I will be placed in the first three overall in both events and I am aiming that I will be in the top five in both the 100m and the 200m. 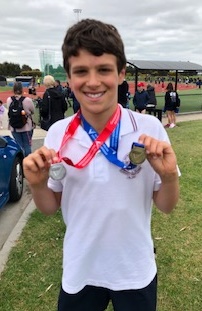 Book a personal school tour with our principal Libby Alessi